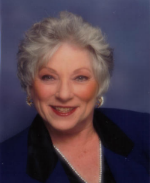 Eleanor was a founding Institute Board Member. She was a beloved colleague, mentor and friend. The first International Adolescent Conference was formed when Dr. Braaten discussed his idea for a gathering of professionals from the juvenile justice, mental health and education fields (who all worked with the same challenging kids). Dr. Guetzloe told Dr. Braaten that she agreed and he should make it happen. That was the start of the conference and beginning of the Institute.

GUETZLOE, Eleanor Carden passed away on Monday, March 3, 2014, after a brief hospital stay following an injury. Her husband, Bruce A. Guetzloe, passed away in August of 2013. Eleanor was the daughter of the late Orelan Ralph Carden and Nell Waters Carden of Tampa. “Dr. G”, as she is known by her numerous former students and colleagues, was 82.

She was a beloved lady who touched literally thousands of lives as a teacher, a professor, a mentor, a daughter, wife, sister, mom and grandmother. She is survived by her three children, Doug (Orlando), Laura (St. Petersburg) and Pete (Clearwater); as well as her daughter-in-law, Stacey; three grandchildren, Alexander, Jefferson, and Madison all of Orlando; and her brother, Arthur B. Carden, Captain, USN (Retired) of Virginia Beach, VA. She is predeceased by her brothers, Orelan Carden Jr. and David Carden.

A Tampa native, Eleanor graduated from Hillsborough High School and received her Music Education degree from the University of Tampa, where she was Valedictorian. The Guetzloe home was always filled with music of many styles from classical to Broadway to opera. Eleanor was also an accomplished singer participating in many stage and theatre productions of numerous Broadway musicals at Tampa Little Theater. Eleanor dedicated her life to teaching, beginning as a music teacher at Tinker Elementary School in 1953. She obtained her Masters from University of South Florida and shifted her focus to Special Education and became part of the Faculty at the University of South Florida Tampa Campus from 1968-1975. In 1975, Eleanor obtained her Doctorate from University of Florida and continued her professorship at the USF St. Petersburg campus, until her retirement in 2001. Eleanor became a pioneering expert and lecturer on the causes and prevention of teen suicide.

Following her retirement, Eleanor received the University of South Florida’s highest honor by being designated “Professor Emeritus” by the University. Eleanor was an adjunct professor at St. Cloud State University (Minnesota), Utah State University (Utah), Ball State University (Indiana), and occupied the DeForest Strunk Endowed Chair in Special Education at the University of San Diego. Eleanor was the recipient of hundreds of awards in the field of Special Education throughout the country. Dr. G was very involved in the International and National Council for Children with Behavioral Disorders (CCBD) serving as Governor for those organizations. She lectured throughout the United States and internationally. CCBD named their Undergraduate Scholarship Fund in her honor. Additionally, Eleanor was a very active member of the Council for Exceptional Children and its divisions: Council for Children with Behavioral Disorders, Teacher Education Division/CEC, and Pioneers Division/CEC. She served as President of Pioneers Division of CEC. Eleanor was the author of numerous books, publications and articles in a wide variety of media and topics.

Both Eleanor and Bruce are interred at Arlington National Cemetery with full military honors in recognition of Bruce’s service as a fighter pilot in the U.S. Marine Corps.